A Flash of Light 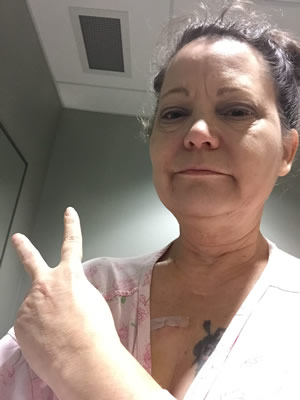 Today (February 28 -- which the days have gone so fast I can't even keep up) had a re-check with the surgeon. Got to collect a few lab reports (which I like to look those over, even though half of it is in "Greek"). Appears the focus is on the left breast and, probably, a left lymph node. Yesterday they did a needle biopsy of that (in my armpit) so those results will be coming in soon. Tomorrow I have a PET scan and Thursday I have a heart echo. My first chemo will be next Tuesday at 8:15 a.m., (and every 2 weeks after) so prayers are definitely appreciated for that day, and apparently in the days directly following.

I've asked all friends and family not to share anything about what any tests or chemo might be like. I prefer not to latch on to anything that may or may not happen. Thanks for honoring that. I have a very impressionable mind, so I'm playing the ghostbuster card and not thinking of anything. (Except, of course, Ray(?) thought of the loveable Staypuft Marshmallow man. LoL)

So about the flash of light(s). I'd been reading the Anthony William book (Medical Medium & Healing Foods). Somewhere he mentioned how, in person, he had a gift where he flashed healing light on everyone in the crowd. I took on the belief that if this was a heavenly gift, I didn't need to be in Anthony's presence to receive it, so just told God, whenever I am present in a flash of light, I'll know you are sending healing. I also decided that whenever in the presence of light, I would be receiving healing from all those who were praying.

A few nights ago, I awoke to a huge flash of light that lit up the whole room. At first, I didn't know what it was, but a bit later, I heard thunder. It's not uncommon to have "thunder showers" with snow here in NW PA, but lightning in February is pretty rare. It flashed a second time before the storm passed. There have been several other odd "flashes" since then. For example, last night the power blinked for no apparent reason.

As another interesting side note, my dad, who passed in 1975, has rarely come through in readings and I rarely sense his presence. While sitting in the car waiting for Tim the other day, Sarah Vaughn came on in a real high jazz number. I've never been fond of jazz, but dad loved it and collected it. At one time he had a very notable collection. (Many were 78s, so many years ago.) So I'm thinking, uhg, why this channel, and I get a sense of dad saying, what? You don't like Sarah? That is THE Sarah Vaughn. So now I keep hearing jazz everywhere I go and I just laugh. Dad is looking in.