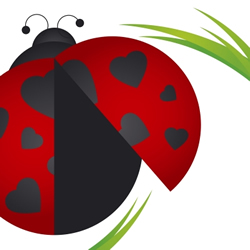 It's bug season. Spiders are hanging in fruitful crops from our front door awning, while ladybugs are moving out in formation searching for suitable hibernation before the snow hits. (It typically snows before Halloween here.)
This morning, we scrubbed down the front door area as spiders dive bombed us and ran for cover. One landed on my husband's arm and he flicked it away. Sometime later, one fell out of my hair. (Eeew! How long had it been hiding there?) "They're just trying to survive," my husband reminded me. (Uhg!)
We have a rule at our house that spiders are not permitted inside, and if they break that rule, they have sealed their fate. (Though I sometimes find it's easier to evacuate them rather then killing them... squishing them gives me the creeps.) Outside, we are on their turf, but dropping on us from the awning is kind of a grey area.
After scrubbing the house, I had errands to run. I noticed while pulling out of the driveway that at least ten ladybugs were on the windshield. They may have liked the bright Voodoo Blue of my FJ. Several "abandoned ship" while at least five didn't leave in time before I was on the road, speeding along at 70 mph.
I tried not to be distracted by them while driving, but found them curious. While some people would have just turned on the wipers and swept them away, I tend to admire ladybugs, who unlike spiders, seem less harmless and are cute. I started feeling sorry for them out there. I kept pulling for them to make it.
In between passing cars and heading into town, I watched as they hunkered down. Two of the little fellows crawled closer to the wiper blades which may have cut the wind they were taking full force. I couldn't see what happened to those on the passenger side, I was driving after all, but one hung on with all its might, front and center, as if glued to the windshield. It must have been a tremendous force against it.
I got to thinking about how we sometimes face a head wind. We're just going about our business and then, all of a sudden and without any warning, we're caught in an updraft. Life gets messy or takes a foul turn. Adversity never comes at a convenient time.
As I pulled off the highway and caught a stop light, I noticed quite a few of the ladybugs flew off, even more than I had visibly seen on the windshield. They may have been surprised to find themselves in a new location (now some 20 miles away from where they started), but they had survived the big wind. They were free to continue their hibernation hideaway. By the time I got to my destination, most of the initial visible ladybugs had flown. One hadn't. Maybe it still feared what had transpired. It stayed down by the wiper blade. I guess it felt safe there.
I took this all in and decided they had provided me with good advice for facing adversity. When things get tough, you can bail (like the spiders) or you can hunker down until the worst has passed, like the ladybugs. Neither answer really seems better or worse than the other. In the spiders' case, the power surge of water probably left bailing as the only course of action, while bailing for the ladybugs might have torn their delicate wings.
Mostly, when the unexpected happens, you have to make a quick decision and just go with it. Later, after you have time to think it through, you may decide it might not have been the best answer, but keep in mind that you did what you had to at the time. Whether you bail or hunker down, you make a decision based on was in front of you at that moment. When adversity subsides, pick up and move on. Don't dwell on it. Except for that one, neither the spiders or ladybugs did. They just continued doing what bugs do after the worst had passed. That's pretty good advice.
Have you recently been in a place where you had to make a quick decision? Did you bail or hunker down? Have you moved on or are you still stuck like the lone ladybug? Let me know below.

Image Credit: Ladybug
back to top