Who do you call for flowers when your florist dies? 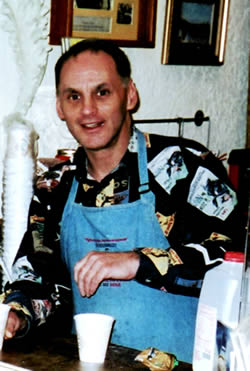 Or What I Learned from Kerry Kennedy

I remember receiving the call and hearing the words that “Kerry was gone” and thinking, “Gone where? Where did he go?” Then realizing that his sister wouldn’t be calling me so early in the morning if Kerry had simply gone on a vacation. Accepting that he's died has not been easy as Kerry was the bright spot in many lives, always giving to others even if he had to do without himself. He loved to brighten people’s day and always had a half a moment to lift someone up.

Officially my cousin, he and his sister Kim (as well as his brother Tommy, who passed in 1981) have always been like siblings to me. We grew up together after the passing of their mom at a young age. Kerry being the youngest, and my elder by a couple of years, we were always thrown together at any gathering and, for some reason, we always seemed to be the ones in trouble. Kerry had no fear of stepping outside the boundary lines if it meant doing something he really wanted to do.

In the days since learning of his death, I have thought many times about all the many things I have learned from Kerry Kennedy and wanted to share a few of the best:

Never be afraid to contact someone: Kerry has been known to call everyone from graveyard owners to superstars. If he could find the contact information, which he usually could (even before the Internet), if he had a question to ask or a smile to share, he would call. He recently admitted that he had tracked down actor Gordon MacRae in the 1970s when he played the part of Billy Bigelow in Carousel during a high school play. More often than not, (MacRae aside) he became lasting friends with that person. Over the years, Kerry built up a network of people who traversed nearly anything you might ever want or need. If you needed something or were looking for something, he had a friend you could call. 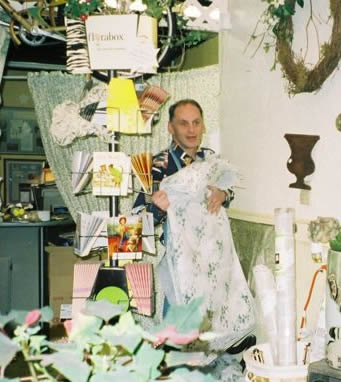 It’s Not About You: When Kerry’s flower shop and apartment burned, he lost everything. He didn’t worry about how to find important tax papers, what it would take to get new credit cards and a driver’s license (his wallet was among the items burned), he spent his time readying the wedding flowers due that week. He often did without and rarely took time for himself so that he could be there for others whether in sickness or in health. If you did something for him, no matter how small, he saw it as a really big deal and told everyone how great you were. He really didn’t like anyone fussing over him. He would much rather fuss over others and see them smile. The bottom line was that, for the most part, he was selfless.

Be Yourself: Kerry was openly gay for all of his adult life even before it was openly talked about, even before AIDS was publicly known, even before rainbow flags. Perhaps because of this, he accepted all people in their uniqueness. You were who you were and if you did not fit the standard mold of what the world thought people should be, he was okay with that and loved you just the same.

You can build something from nothing:  If you’re old enough to remember the Andy Hardy movies with Mickey Rooney and Judy Garland, then you may remember scenes where the “kids” decide they need money and are going to put on a show. Using an old barn and things they, supposedly, find lying around, they create a professional-looking show that somehow looks like they just stepped onto Broadway. (A little help from movie magic never hurts.) Kerry was just like that. He could create amazing things just using what he had lying around. Didn’t matter if it was a little bit used or a little rough around the edges. No one would notice. It would be special. People would be surprised, grateful, amazed.

Cooperate with Your Competition: I always remember Kerry wondering why the florists in the area couldn’t hire one driver to deliver all their flowers or why local cab drivers might be able to use downtime for the same purpose. While this idea may not have taken off, he didn’t see any reason to shun the competition, even if they did him.

Support Local Business: Kerry lamented how “wire services” were hurting small, local florists’ shops. He loved supporting all types of local and small business by either selling their goods in his shop (including special brands of chocolate milk, ginger beer, and chocolates) or by promoting them via his Facebook feed, raving about their goods or services or meals. 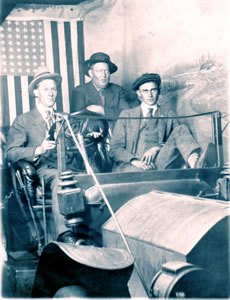 Reuse, Recycle, Regift: After the fire, Kerry’s start-up funds were limited. He started a movement to return unused vases. (Don’t we all have several just collecting dust?) The response was overwhelming and it got him over the hump.

Honor Your Roots: If you knew Kerry, you for sure heard him tell stories of his beloved grandmother, favorite aunt, his parents and his brother, and others long passed. He had set up memorials in his home for some. He’d drive hundreds of miles to decorate their graves. They were never forgotten. He even spent time researching his grandfather “Zollie” who had long left the fold after divorcing his grandmother. (Image, Zollie Beals, far right.)

Extending Your Family: There is a bible verse where Jesus asks, “Who is my mother? Who are my brothers? Then he pointed to his disciples and said, “Look, these are my mother and brothers.” (Matt 12:48-49 NLT) Kerry opened his arms to many as surrogate family. Our family, having lost so many key figures in its past, we all have learned to adopt others into our fold. Kerry treated most everyone as if they were family. He often brought friends with him for our family Christmas and opened his home and shop to many.

Celebrate the Arts: Kerry had many favorite artists, musicians, choreographers, doll makers, designers, and other creatives. His tastes were eclectic (what I call Bohemian). Often favoring twentieth-century modern design, he’d passionately display his favorites and teach others about the importance of these creators and their wares. He’d longingly lamenting if a once renowned company closed its doors.

Paying Kerry Forward: At Kerry’s funeral, as many stood and told “Kerry stories,” I mentioned how many people I noticed received frequent, if not daily, messages or calls from Kerry. I said I knew they would be missing those calls in days going forward because Kerry often lent a listening ear or offered encouragement or a laugh to brighten someone’s day. I challenged them to now pay it forward, reminding them that it only takes a moment to send a quick message and that most people don’t need things as much as they need someone to listen, and someone to believe in them and their ability. Kerry believed in them with all of his being, and I suggested that they too could remember Kerry by passing that kind of belief on to someone else in their circle of influence.

None of us can bring Kerry back, but in each day going forward we can honor his memory by learning the unwritten rules he lived by.