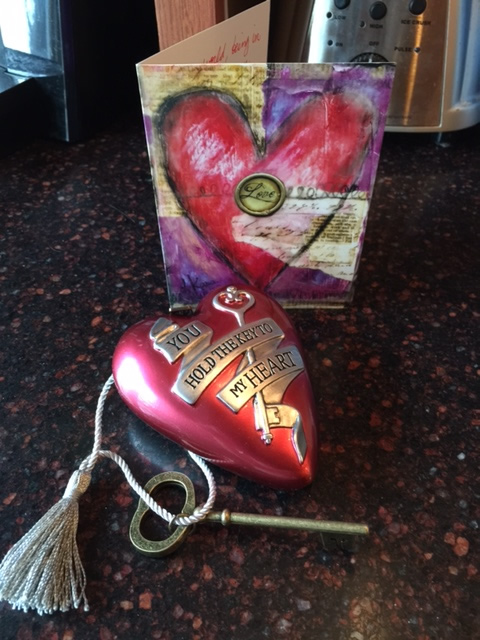 On my side of things, between chilly temperatures and red tide, I ended up sick as a dog, spending the eighth night in the bathroom floor, praying to God I could survive whatever bug or ill food I might have eaten. (Though I could think of no reason to be so.) I lost three pounds that night.

Meanwhile, Mother Nature decided to help out by covering our area with snow. Remember when Buffalo shut down due to the 2014 blizzard? Yeah, that was the day I was to fly home... into Buffalo. (That wasn't happening. The Buffalo Airport closed.)

Gratefully, understanding my dire desire to "just get home," my BFF got up out of bed at 3 a.m., and transported me to the airport, where I changed my flight to Pittsburgh, and flew home, while she waited another five days until the Buffalo Airport cleared.

Hubby drove through the snow and nine-below temperatures to pick me up that day. Neither of us barely spoke to the other on that long drive home. The tensions of being apart, my having been ill, his terrible week, seemed to be without words.

It would take weeks, months even, before we could finally talk about it, laugh about it, and admit—we were never meant to be apart. Ten days is just too long, we determined, and vowed never to do that again. From that ugly chain of events, love resprouted, and like the coming spring, bloomed brightly once again.

Then recently, through a strange coming together of odd, totally unrelated events, something wonderful and amazing occurred.

On March 25th, one of my Facebook groups posted that we should find a key. "Creative Play Day," the group leader declared. I told her the story about a skeleton key I wore religiously in my youth, in defiance of a trying adolescence. I declared this as the key to my private, creative world where I could escape the difficulties of real life. Of course, I had given it to my husband after we met. He wore it for a time, then, after we were married, it hung on his jewelry rack for years, until one day we noticed it had somehow disappeared. "It's time to find a new one," the Facebook leader declared. But I had my doubts. What key could replace that one?

Around that same date, Hubby had his own key encounter and slyly made a purchase. He said nothing. It would be a surprise he would keep for "someday," he thought.

On April Fools Day, I attended a writer's meeting. We were looking for speakers for a fall event. I mentioned a local venue where a new speaker would be talking the next day. Though unsure that I really wanted to go, I volunteered to scope it out and report back if I thought she would be a good candidate.

Driving through a downpour (I probably would have opted out had I not promised), the people and talk warmed my heart, made me laugh, and assured me that, if she were available, Chris Sparta would make a delightful speaker for anyone's event. But something more surprising happened than that. I found myself incredibly drawn to taking her workshop two days later. I didn't know why, I just knew I had to be there.

Chris offered a wonderful class about writing cards, mailing real letters (no emails, please), and on the heart-touching, closet hoarding of these sentimental bits. We were each reminded of this by the cards and letters we brought in to share as participants. We were then asked to select cards from a stack on the table and write someone.

I wrote my sons, but couldn't get my eyes off a heart-ladened card that seemed to smile at me from across the table. "Write more than one!" Chris encouraged us all. So I latched on to the card, wrote a heartfelt message to my husband, addressed it, stamped it, and put it in the mail.

Today, on my daily post office run, the card reappeared. I had hopped he would have been the one to do the pick up, but no matter. I stuffed it in between the bills, the flyers, and a small box that arrived for him. (Getting boxes from Ebay is a common occurrence at our house.)

Once home, I tossed the mail on the counter hoping he would see it. Although he always grabs the mail right away, sorting it for bills, for some reason on this day, it sat. The purple corner of the envelope teased me from its hiding place, but I promised myself I would not crack. He had to find it.

He did. But before he had held it in his hand for more than ten seconds, he disappeared. Where had he gone? When he re-emerged, he had a small wrapped box in his hand. "I bought this for you the other day," he said. "You just carried it in from the mail. It's perfect," he added.

Well, that was an unexpected twist.

I held the box in my hand. What could it be? He was always finding the most unique things. When I opened it, we both laughed. A heart, nearly matching the one on my card exactly, lay in a box. Attached was a key (it becomes a kind of stand for the heart), replacing the one we had long-ago lost.

It's hard to imagine how all these pieces had come together, yet there they were in both our hands.

Maybe I should go away more often—just not for more than a few days.