The Fantastical Mind of Phoebe Ravencraft: From Spider-Man to Jimmy Carter 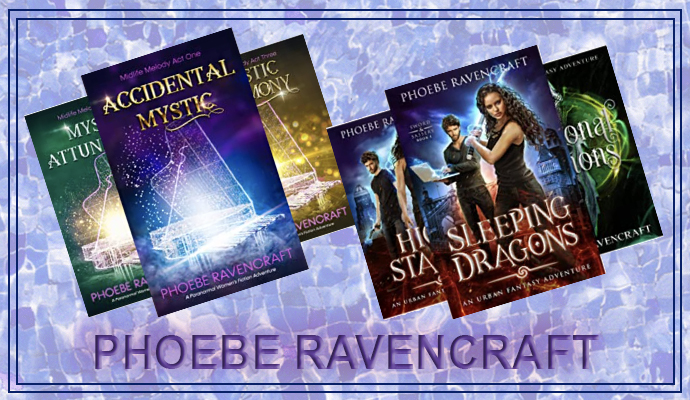 Although I already have my own overly tall stack of to-be-read (TBR) books, I try to be a discerning buyer. I read reviews and, more importantly, peek at the allowed opening pages. When I did my pre-read peek of Accidental Mystic, I didn't find what I expected. No magic shooting through the air, just the sparks of mid-life frustrations. No philosophical answers about the meaning of life, just an emotional pull from a menopausal woman losing her family and trying to make her way through an upended life. At first glance, it didn't sound like the kind of book I might be looking for. . . except, I couldn't stop turning those free pages and something about Bethany Parker sucked me in. After I bought the book and read it. . . ooooh, boy, every page turn seemed to bring a new surprise—the kind that had me saying "No way!"—including some magical creatures and some of those philosophical life questions I might have wanted on page one. Totally hooked, I immediately bought book two and then asked fantasy author Phoebe for an interview. (She said, "Yes!")

JS: As someone who has dressed in costume as Professor Trelawney (Harry Potter) and Jocasta Nu (Star Wars) I can appreciate a well-rounded movie fandom, which I know you have. Do you have a favorite character from these or other movie favorites? What have you learned from them or their creators?

PR: The fictional character I’ve always identified most closely with is Spider-Man. He was originally packaged as The Hero Who Could Be You, and I’ve felt that intimately. Both Peter Parker and Miles Morales are poor. They’re constantly fighting to keep their heads above water. They have a few close friends, but otherwise, they’re treated like weirdos. And yet, they keep going out to do the right thing, no matter the personal cost. I’ve got a well-developed superhero complex, and Spider-Man is the foundation for it.

JS: I can’t lie, I am a big Bethany Parker fan. I realize the Midlife Melody series is a very different audience than your New Adult Sword and Sassery series. How do you switch gears from one audience to the other and keep it real for each set of readers?

PR: It’s really about getting in the main character’s head. Both series feature first-person narration, so I just focus on how the character sees the world. Sassy and Bethany come from very different backgrounds, and they, therefore, see the world differently.

Sassy grew up in the poor part of Cincinnati. She’s light-skinned Black, so she struggles to be accepted in either world – too dark to be White, too light to be Black. She’s also only 25 when the first novel begins. She went to college for one semester before she realized it wasn’t for her. She never knew her father, and her mother died of cancer when she was only 21. She’s got a straitlaced big brother who thinks he can boss her around. And she’s bisexual. She has a lot working against her societally, and she’s haunted by multiple personal tragedies.

Bethany, on the other hand, grew up in an upper middle-class household. Her father was a literature professor, and her mother was a nurse. She grew up in Boston. Her whole upbringing was vastly different than Sassy’s. And when she was 18, she left home for college in the Midwest and never looked back. But when Accidental Mystic opens, she’s just turned 50 and is nursing a number of hidden wounds, including her inability to have children. She suffers from that midlife malaise of not having accomplished what she set out to do when she was younger. She has an entirely different set of life concerns.

Each character speaks to a different audience. As long as I stay true to who they are at the core, it’s easy to stay in their heads and speak with their unique perspective to the readers who love them.

JS: I know you are a busy individual who juggles real-life and fantasy writing. Tell us a little about your writing process. Are you a pantster or a plotter? Do you prefer pen and paper or digital? What’s your writing life like?

PR: I’m very much a plotter. Especially now that I dictate instead of type, I cannot go into first drafting without a plan. I’ll get stuck and not know what to write next.

My process is to sit down with a notebook and plot out the story beats and scenes with a mechanical pencil. I make sure the pencil is a color I like – usually purple or pink – so that the experience is more enjoyable. And it’s important to plot in pencil because I make a lot of changes as the story takes shape.

Once I’ve got it all plotted, I sit in my favorite chair and dictate into my phone, using the notebook as a reference. If it’s a good day, I can dictate 2500-3000 words, fewer on a bad day and more on a great day. By dictating into my phone, I can’t see when the software makes a mistake. I tried dictating straight to the computer at first, but that killed my word count because I couldn’t resist the urge to correct mistakes.

After everything is transcribed, I print the book and read it. I make a ton of editorial notes, and then I go back and rewrite based on my notes. At this stage, I typically add 5000-10,000 words to the manuscript (usually, because I’ve noticed there’s a hole in the plot that needs to be filled). Then I print and read it again, following the same process (typically cutting around 3000 words as I tighten the writing).

The third draft goes to an editor, and when it comes back, I follow their notes and whip it into final shape. One of the reasons I can only write 2-3 books a year, is because I’m a bit obsessive and tedious with my process. But I don’t want to publish a weak story or a book with lots of typos.

JS: What are you working on now? What's coming up next for your readers?

PR: Book 3 of Midlife Melody, Mystic Harmony (Editor's note: It's available for preorder here.) should be out this month. It’s with the editor now. I’m excited for it because all of the plot threads I’ve been seeding through the previous books come together in a spectacular climax. Then I’ll be working on Book 4, which will start a new story arc.

I haven’t made plans for the latter half of 2023 yet. I’ve one more book to write for Sword & Sassery, which I should really get finished, and I am in the early stages of developing a new series.

JS: Who's your favorite author and what is it about their stories or writing that pulls you in?

PR: I’m not sure I have one anymore. In high school, I loved Stephen R. Donaldson, because he wrote the most richly detailed, original fantasy worlds. But his main characters are generally loathsome, and he’s a little too comfortable with sexual assault in his books.

In college, I discovered Albert Camus. Not only did his nonfiction essays really make sense to me when I was trying to figure out who I was, his novels also spoke to me. Le Peste (The Plague) has stayed with me my entire adult life.

What I really look for are characters that speak to me, with relatable struggles. Margo Hansen from the TV version of The Magicians is a favorite. So is Willow Rosenberg from Buffy the Vampire Slayer, especially the earlier episodes, when she’s a nerdy girl trying to figure out where she belongs and finds it in magic.

JS: Name someone real, living or dead, who you have met or wish you had, who has influenced your life and why.

PR: Former President Jimmy Carter heads my list of people I’d like to meet. He’s the only man in the history of the office to use it as a stepping stone to greatness. His attitude that his time in office wasn’t the end of his service to humanity is inspirational. He could have sat back like other former presidents and done some easy charity work and cashed in on his reputation to get richer with speaking engagements. Instead, he recognized that he had a platform he could leverage to really help people, and he was willing to get his hands dirty building houses, feeding the hungry, etc. He’s a constant reminder to me that the job is never finished. You can take pride in your accomplishments, but don’t forget there are more people waiting for assistance. If there is anyone alive right now I’d like to be like, it would be President Carter.

You can find Phoebe Ravencraft's books online at all your favorite book stores, or visit her on the web at: http://phoeberavencraft.com/.