I haven’t written the past couple of weeks because there wasn’t anything new to report. It was mostly me sitting in a chair watching time go by. Some of the early days after chemo #6 were not all that pleasant. I had some joint aches and nerve pain and sometimes didn’t feel like eating. Despite Tim making sure I ate. . . something. . . sometimes more than I thought I would. . . I lost four pounds, but admittedly, I’m not sad about that and had been eating way too much anyway. (Blame it on the steroids.) I’m still eating whatever I want, just a lot less of it.

After several days of not feeling all that well, I flipped on my Netflix. I made the mistake of watching a movie that turned out to be rather depressing and needed something to cheer me up. I decided to watch some of the Undercover Boss shows. I like the surprises the CEOs learn and how they try to affect change with their companies and the people they encounter.

In one of the shows, a CEO of Waste Management had been given the job of collecting blowing debris of a windy hill. His counterpart could fill two garbage bags in ten minutes. The CEO couldn’t even fill one. The CEO later learns his instructor is on kidney dialysis and can’t believe the man’s work ethic and ability under the circumstances. The fellow explains that he doesn’t let his body tell him what he can do, he tells his body lest he find himself unable to do anything.

That hit me really hard after all the sitting I had been doing. It encouraged me to try to do a little more each day, even if I still had to take it easy, still had to have periods where I just sit, and still couldn’t do all I wanted to do. Sometimes that means just taking short walks up and down the driveway. I started feeling a little better after that.

I met with a Physician’s Assistant this week, reviewed my shopping list of side effects. Most annoying is the numbness in my fingers and toes. Apparently, if I can button a button or put on an earring back, I’m still good to go (which I can—though handwriting is a little sketchy and I can’t manipulate some things like the lock on the side door). They claim for most people these effects dissipate after chemo is done. Personally, with only two more to go, I just want to get them done and move on to the next stage (surgery), which I will be reviewing with my surgeon soon.

Thanks again for all your comments, cards, letters, and prayers. They really mean a lot. They often come just when I need them most.

I walked into the secondary waiting room of the Lecom Imaging Center today, glanced over at the coffee table of magazines, and something caught my eye. Next to a large stack of the typical, well-read reading fare, a single magazine set off to the side grabbed my attention. In large letters across the top it shouted, “Miracle.” I’m not sure if one of the technicians had purposely set it aside like that. I do know it caught my attention and I decided to mark the occasion by snapping a photo of it with my phone.

I went to the Imaging Center for a follow-up mammogram and breast sonogram. These were to compare to the ones I had back in February and to note my progress. After the mammogram, waiting for the radiologist to review the films (again, sitting in the “Miracle” waiting room), the technician came out and hugged me to let me know the tumor had shrunk considerably. This we already knew since it had visibly sat on the skin’s surface and we’d all been well aware of its thankful disappearing act these past weeks. 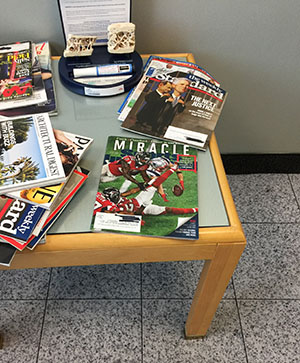 Next up was the sono, which, for me, offered much more significance since this would let us know the status of the left arm’s involved lymph node. After reporting to the radiologist, the technician returned, hugged me as if Tim and I just announced our wedding engagement, and stated that there is no visible evidence of cancer in the lymph node at this time. How’s that for a “Miracle” room?

Next week I’ll be up for more challenges including chemo #6 on Tuesday and a breast MRI on Thursday. It will be a busy week with other obligations thrown in every day that week and all on my “slow” energy period. I’ve been repeating a mantra “it doesn’t have to be hard” and hoping that the few new side-effects that showed up with chemo #5 will diminish or be “one hit wonders” that feel no need to have a return engagement with chemo #6.

While I continue to wait out the weeks of chemo and treatment, I see little miracles everywhere. Monday we were greeted by a waitress harboring some illness who excused herself to leave for the doctors shortly after seating us. (Thank goodness, as I’m not to be exposed to anything in my low immune condition.) This is just one example of many.

Lastly, please know how much all of your comments, notes, cards, and messages mean to me. They always come in just at the right time and you all are so amazing in knowing just what to say. I’ve been so touched by all of the support I have received and I am immensely grateful to all of you. Thank you from the bottom of my heart for being there for me.

Through the Looking Glass

I sat across Tim at lunch today and said, I have nothing to talk about because I’m not doing anything. He disagreed, but the conversation remained muted.

I’ve spent the majority of the past couple of weeks sitting and doing nothing. I’ve watched — actually watched — more sports than I have in my life. Normally, I listen while working on the computer, crocheting, or doing something else. Now I just watch. It doesn’t make me any more of a fan, but I know more of what is going on during the games.

I did have my doctor visit on Monday, May 1, which was anti-climatic. Nothing new to report other than to move forward toward phase two of the treatment. I had chemo number five on May 2. That one was like landing with turbulence. As before, they give several pre-drugs via infusion, but this one had something that left me feeling agitated. They also give a pretty good dose of Benadryl, which made me extremely groggy. I kept dosing off. The other downside of this phase is that the main drug is infused over three-plus hours (slower during the first two), so it makes for a very, very long, slow, day. And since I'm not fully coherent, that makes the day seem to drag all the more. Three more of those to go.

But now I’m in what we could call recovery week of that last treatment. Mostly I find my energy levels to be the biggest thing. (They are pretty much non-existent.) I’ve had a few new side effects, including some nerve issues in the extremities (which they predicted), along with intermittent body aches. I sometimes have leg cramps in the night as well. These seem minor overall but tend to be taxing and frustrating when the mind wants to do things and the body says, “no, we don’t have the energy for that, let’s not. Let’s just sit instead.”

One new experience this week happened when son, Mark, came down with bronchitis. Normally, Mom would be there with flying colors, bringing Gatorade, soup, and other motherly devices. Instead, my role shifted to that of quarantine. Stay away. Don’t go near. (Do you know how hard that is for a mother?!) I’m told Matthew may have a touch of it too. Of course, they are managing. . . but mothers want to be there. Mothers want to make the world right again. Mother’s Day may be more of the same. . . wave at Mom on the other side of the protective glass.

That’s where I’m at for now, just a little flower under protective glass. 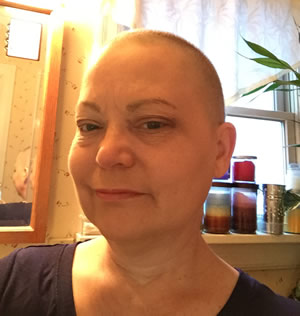 Sometimes I look in the mirror and just feel like an alien. I have no hair. My scalp feels like rubber. My eyes seem to dominate my head. I retain water and feel larger than Jamie. I’m writing this looking at a photo of myself from 2005. I’m not going to be that person ever again. (Not that I could have been anyway.)

Potatoes. . . my body needs them. I have no idea why, but I am complying. This ranges from potato soup to tater tots, french fries to baked potatoes, potato chips and potato pancakes. Potatoes. Yes, please!

Television. . . thank God to its inventor. It does help to pass the time when nothing else is going to happen.

Boredom. What happens when I have no energy to do anything but have enough energy to hate doing nothing.

Sneaks. The things I do when no one is looking, then own up when caught. (See Anxiety.) 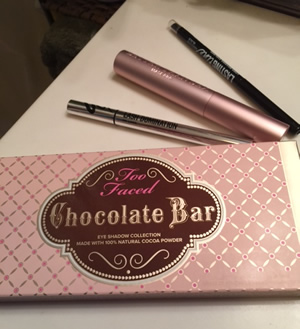 Dates and Numbers. I can't do them well right now. I thought I was seeing the oncologist last Monday. No, it's this Monday coming. I had to take my new bank card to the bank. I messed up the automated activation. Don't even talk to me about balancing the checkbook.

Sometimes just putting on makeup requires me to sit down after and take a breather. I do it anyway because my mother did. She always did her best to look good no matter what. (Role models.) The makeup doesn’t do much to hide the alien, but the “Better than Sex” mascara and Chocolate Bar* eye shadow make me feel better about myself.

*I didn't receive anything to promote these products. The opinions are my own.