Disclosure: Links posted for products and services may or may not contain affiliate links including compensation (i.e., Amazon Associates links). You should always perform due diligence before buying goods or services from anyone via the Internet or offline. Feel free to contact Jamie Saloff via the contact links on this site if you have any questions about any links on the site. 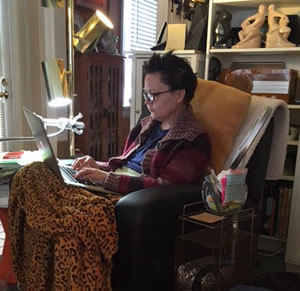 I haven't sat at my desk in probably two to three weeks. . . I mean really sat there and did work. (Still haven't. . . in case you're wondering.) It's funny the things I find there, and how their meaning has changed. Found hand-written notes about things I'm supposed to do or had been working on, odd bits of meaningless mail to review in the future (most of which just got tossed away), projects I had been working on - now canceled, put aside, or to add to some forgotten list for yester-morrow.

I'm also collecting other random things. . . an angel worry stone, a monarch butterfly, cards, dragons. I had a dream the other night where little flappers kept turning and each one was a piece of randomness of my life. Weird. Then last night, a sweet dream where I was playing with some children with a little playhouse of sorts and Kris Seastead came in. It turned out we were at Louise Hay's house (imagine) and she had all this specially prepared food for whoever needed it, but also took time out to integrate what the children were doing. Everything was intermingled out of doors.

I find everything is kind of cloudy. . . my spelling sucks (text recipients have confirmed this! LoL). My fingers don't work fast enough or something. LoL. I am at slow-slow-slow speed. My brain must be just a notch up from that as thoughts come out incomplete. (Nothing is happening fast.)

Today we ran errands ahead of a coming snowstorm, plus had my first bloodwork. That part went quick. (No results yet.) Went to Max & Erma's and some of the pharmacy gals were up there. Of course, they know us by name. (There's no hiding in a small town.) Like the randomness of everything else, I've found I collect leftovers. I don't eat a lot. One dinner out meal might be 3 meals for me.

Tim stopped and got me some Entenmann's chocolate covered donuts because, you know, it's the little things that mean a lot. (yum) A few bites before bed. . . just like when the boys were little.

Seems like I'll I've done the past few days is sleep, but did manage to sit up for a few hours a couple of times in the chair today. Tim is making sure I eat something at regular intervals but am not eating large quantities of anything.

It's funny how important simple pleasures are at times like this. A cold drink. A hot shower. Clean sheets. LoL

Tomorrow is Tim's birthday. Hoping he has a special day. Then Monday I get my first blood check for counts. Fingers crossed that they are good. 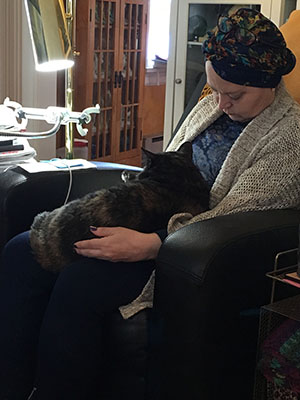 Had my first treatment Tuesday. Drove in during a thunder and lightning storm. (More flashes.) Then Mark texted me the following:

"I don't know what you did... But it's raining on half my street and not the other and there is a rainbow over your house from here. Someone somewhere is looking after you. Have a great day."

All in all, the treatment part wasn't bad. Also got a robo shot pack so I wouldn't have to come back the next day. Had a few rough moments at home, but mostly have been sleeping, resting, sleeping resting sleeping. . . (Cocoon.)

Today I went to chemo school. I'm glad I went. It wasn't at all what I expected. Well, to start, we had been told, just go to the information desk when you walk into the hospital and they will tell you where to go. But the young security guard at the desk didn't know where it was. He got on the phone and started calling around asking people where I should go. Then a second young security guard showed up. The two conferred and since guy number two didn't know either, he got on a second phone and started calling around. Then a third security guard showed up (I can't make this stuff up). He also got on a third phone. All three were on the phone talking to different people trying to find out where this chemo education was supposed to be. Finally, guy number two told us to get on the elevator and go to the sixth floor. Turns out that was still not the right place, but we finally got where we were supposed to be. Seems there are secret sixth-floor elevators we needed to take. (At least we know now.)

Just as we were walking away from the security guards, all kinds of lights started flashing (remember what I said before about that?) and the security guards were called to a code red. We never did find out what that was all about, but the lights were flashing up on the sixth floor too. 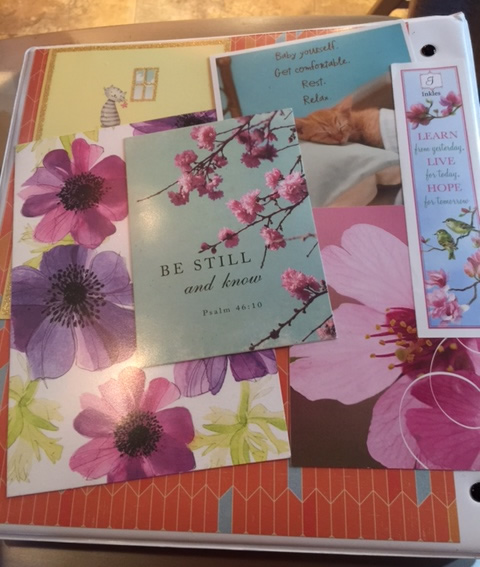 Once there, I honestly expected to be in a room with a bunch of people all asking questions and I wasn't really looking forward to that. But instead, we were taken to a private chemo room where we had a one-on-one with a super smiley happy nurse. Turns out they had all been doing chemo over at the cancer center, but (I think she said around Labor Day last year) they had started doing all the chemo at two of the area hospitals instead. (I'm doing mine at UPMC/Hamot.) So she explained all about what to expect, hour-by-hour, and day by day for the coming week. She made it sound almost easy.

She gave me a great notebook that was put together very thoughtfully with all kinds of great info and stuff you might need as a chemo patient. Even a calendar. (I can't wait to put big Xs on the days of chemo that are D. O. N. E. Of course, I had already made a notebook, so I brought that one home and added it to mine. Mine has all kinds of sayings on it like "Remember this moment," and "Life is a garden, so dig it." And a bunch more. On the binding it says, "Life's a Journey, Here We Go!"

Then we stopped over to see my MD who hadn't seen me since the 13th and a lot has happened since then. We were so pleased to learn that the girls in the office had dug through the archives and found my paperwork from 1985, something the cancer center had hoped to find. We hope they found all they need but were so-so grateful for the girls doing that for us.